Instead of blanking out history, we need to be tackling the hard tasks of improving BAME representation in our boardrooms. That's the theme of Jim's blog this wek where he also says there are challenges for the black community and protestors. 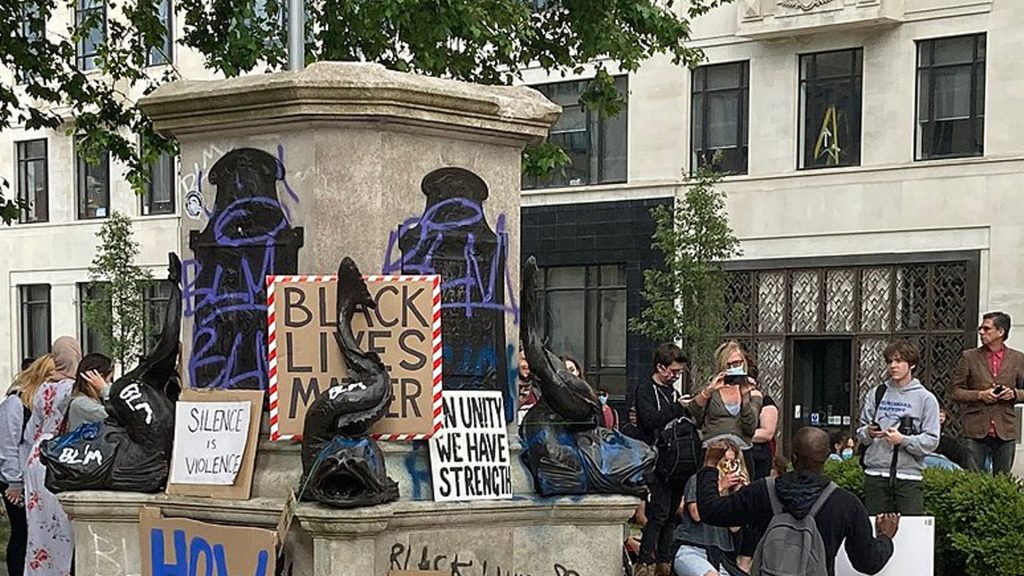 [vc_row type=”in_container” full_screen_row_position=”middle” scene_position=”center” text_color=”dark” text_align=”left” overlay_strength=”0.3″ shape_divider_position=”bottom”][vc_column column_padding=”no-extra-padding” column_padding_position=”all” background_color_opacity=”1″ background_hover_color_opacity=”1″ column_shadow=”none” column_border_radius=”none” width=”1/1″ tablet_text_alignment=”default” phone_text_alignment=”default” column_border_width=”none” column_border_style=”solid”][vc_column_text]Blocking out the past won’t help with the future for our black community. As a person who loves history, I am worried that pulling down statues and changing street names will hide the crime of our slaving past. Plaques should be put up to explain the dark past of these men. They will be in the public realm for everyone to see. Not everyone visits museums.

In any case there are signs that the campaign to obliterate the past is getting out of control. Just as the violence against the police did no favours to the memory of George Floyd, nor do the extreme demands of Black Lives Matter. In Liverpool, there is a move against the Liberal Prime Minister William Gladstone because, its claimed, he benefitted from his father’s wealth from the West Indies. William Gladstone fought for Home Rule for Ireland, expanded the franchise, and opposed Turkish cruelty against the Bulgarians.

On that latter point, only 20% of the world is ruled by white Caucasians. 80% of the world population is governed by Asian and African leaders who have not always had brilliant track records in the fields of corruption and human rights.

History is complicated. It should be studied not buried and meanwhile we should move on from protest to the underlying issue of why BAME representation in boardrooms and higher paid jobs is so poor.

Black people represent less than 1pc of business leaders running the largest UK companies. Overall, the ethnic minority figure is actually going down from 9% in 2018 to 7% last year.

Beyond business the picture is the same. Take our top thirteen sporting organisations like the FA, UK Sport and UK Athletics. There are only three black members on the governing bodies. You’ll find a different picture when it comes to the people cleaning the boardrooms.

It is a vicious circle. Black youngsters don’t see their peers in senior positions, and this feeds back into motivation at school. White people don’t encounter black people as their bosses and this feeds into underlying racist attitudes.

Some points need to be made on the other side of the argument. It is wrong to equate our police with their American opposite numbers. The Stephen Lawrence case was far from the last of its kind but generally our police are far more accountable than is the case in America. They are generally restrained, even when provoked, and have been criticised when they don’t intervene as was the case in Bristol on Sunday. Some members of Black Lives Matter want no police. Such policies are silly and discredit their otherwise laudable aims.

Finally, it is a fact that the black ethnic community has the highest population of lone parents. Absent black fathers is a subject that many liberals don’t want to discuss, but it surely must be damaging as youngsters grow up not to have a father around.

So, let’s have an honest debate on both sides and then business and our institutions need to move rapidly to improve BAME representation and get out of the comfort zone of appointing “people like us”.[/vc_column_text][/vc_column][/vc_row][vc_row type=”in_container” full_screen_row_position=”middle” scene_position=”center” text_color=”dark” text_align=”left” overlay_strength=”0.3″ shape_divider_position=”bottom”][vc_column column_padding=”no-extra-padding” column_padding_position=”all” background_color_opacity=”1″ background_hover_color_opacity=”1″ column_shadow=”none” column_border_radius=”none” width=”1/1″ tablet_text_alignment=”default” phone_text_alignment=”default” column_border_width=”none” column_border_style=”solid”][vc_raw_html]JTNDYSUyMGhyZWYlM0QlMjJodHRwcyUzQSUyRiUyRnR3aXR0ZXIuY29tJTJGSmltSGFuY29ja1VLJTNGcmVmX3NyYyUzRHR3c3JjJTI1NUV0ZnclMjIlMjBjbGFzcyUzRCUyMnR3aXR0ZXItZm9sbG93LWJ1dHRvbiUyMiUyMGRhdGEtc2hvdy1jb3VudCUzRCUyMmZhbHNlJTIyJTNFRm9sbG93JTIwJTQwSmltSGFuY29ja1VLJTNDJTJGYSUzRSUzQ3NjcmlwdCUyMGFzeW5jJTIwc3JjJTNEJTIyaHR0cHMlM0ElMkYlMkZwbGF0Zm9ybS50d2l0dGVyLmNvbSUyRndpZGdldHMuanMlMjIlMjBjaGFyc2V0JTNEJTIydXRmLTglMjIlM0UlM0MlMkZzY3JpcHQlM0U=[/vc_raw_html][/vc_column][/vc_row]

Laying down friends for his life

Jim looks forward to how the Prime Minister will handle the Gray Report and probably survive. He also asks if Bury South Labour Party will be free to decide if defector Christian Wakeford represents them at the next election

The defection of the Bury South MP to Labour has only served to prop up Boris Johnson according to Jim. But his blog this week focuses on Lancashire’s unusual bid for devolution and the challenge faced by small businesses by Greater Manchester’s Clean Air Zone.

“Worn out defending the indefensible”

The forthcoming report on Partygate could seal the Prime Minister’s fate. But in his blog Jim warns that Johnson could still escape,with Scottish Tories splitting away.