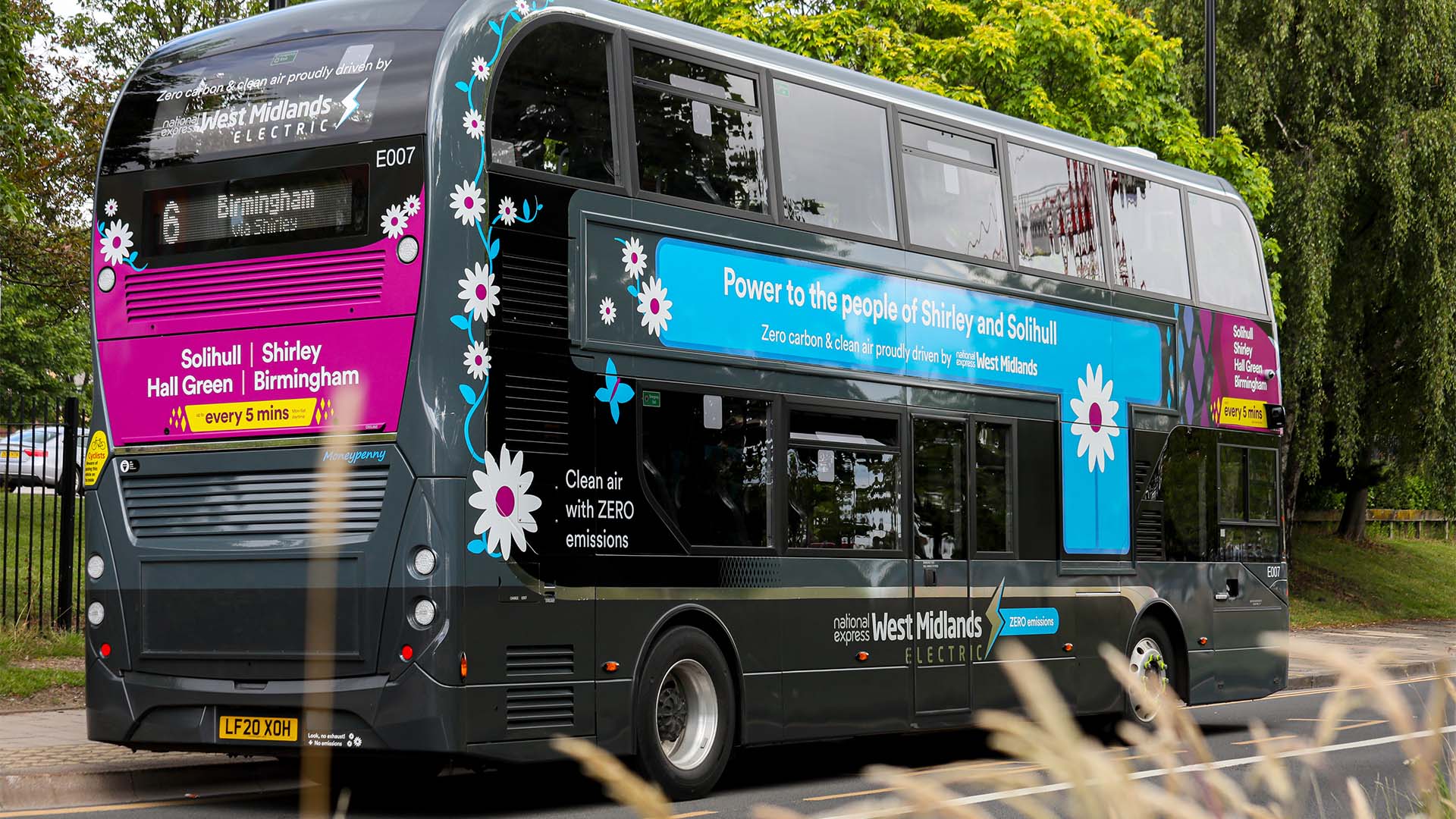 National Express West Midlands is making good on its promise never to buy another diesel bus.

At 0637 on Sunday 5 July 2020, the company’s first fully electric double decker left Yardley Wood garage to carry passengers on the 6 route to Solihull, via Hall Green and Shirley.

Bus number E008 “Laura” was soon followed by her sisters – there are 19 electric buses based in Birmingham. 10 more are arriving from Scottish manufacturer Alexander Dennis to National Express Coventry and will be out in service this autumn.

“At National Express, zero-emission is not the future – it’s the here-and-now.

“Earlier this year, we announced that National Express had bought its last diesel. Our bus fleet will be zero emission by 2030, and our white coach fleet by 2035.

“Buses are already one of the cleanest ways to travel. For four years, we’ve been working as part of the West Midlands Bus Alliance to tackle climate change and improve air quality. We’ve retrofitted nearly a thousand older buses with new exhaust systems, and since 2015, we’ve bought only the cleanest diesels on the market.

“And now we’ve gone all out with these beautiful buses which are fully electric – even the heaters run off the battery. They cost more than a Rolls Royce Phantom, and as well as being great for the environment, they come with all the top-spec kit our customers expect from a Platinum bus – extra space, USB chargers and free wi-fi.

“We’re very proud that National Express is bringing fully electric buses to the people of the West Midlands. I’d like to thank all the drivers, trainers, engineers and managers who have worked so hard behind the scenes to make this happen.”

Bus drivers have to be specially trained to drive electric buses. The vehicles behave completely differently to combustion engine-driven buses, and drivers have to drive to preserve the charge for as long as possible and extend the range. Engineers too have been trained in a whole new kind of maintenance.

It’s not just the people who’ve had to change their ways. National Express’ 80-year-old Yardley Wood garage has been retrofitted with a shed-sized battery, a charging station for each bus and a system so engineers can monitor the buses’ performance from screens up in the depot or their laptops. The buses charge up in four hours, and can run for 190 kilometres before needing another charge.

National Express West Midlands was awarded £3 million by the government in 2016 to help fund the extra cost of an electric bus and the necessary equipment, and the bus company has invested £11 million in the project.

“These vehicles produce zero carbon emissions at the tailpipe and are powered by renewable energy. This is a significant step towards cleaner air in Birmingham and achieving a net-zero carbon by 2030.

“It’s a privilege and a pleasure to see them in operation and I welcome the addition of more electric buses on more routes in the future.”

Anyone wanting to spot one of these hi-tech buses should look out for the number on the back of the vehicle. After reaching fleet numbers in the 7000s, National Express West Midlands has literally reset the clock – the electric buses start from 001 and carry the prefix “E”. There won’t be too long to wait to see an electric bus – they come along every 7 minutes. The future is already here.