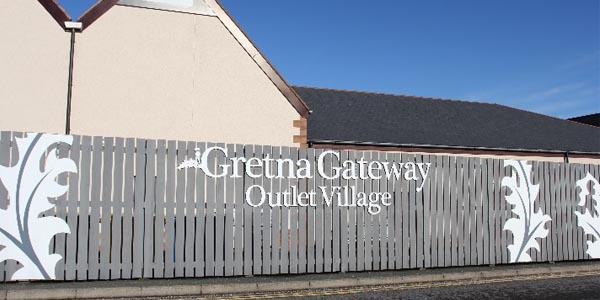 The new streamlined waste management system has resulted in significantly less waste collections on-site as the numerous bins have been replaced with a compactor that uses a telemetry system to alert B&M when it is ready for collection with an automatic email sent to B&M’s operations team.

New bins have been provided for each retailer to segregate general waste, cardboard and plastic film. An on-site waste operative is responsible for collecting the bins via an electric truck and trailer provided by B&M. The general waste bins are decanted into the compactor using a bin lifter, while the operative removes the cardboard and plastic to make bales. The bales are stored under a cover until there are enough of them to fill a curtain-sider and Gretna Gateway receives a rebate for the material.

There are also a number of cafes and restaurants that produce food and glass waste for separate collections. Some of these do not produce enough waste to fill their own wheelie bins so they place small amounts outside in caddies and the waste operative collects and condense this in the corresponding wheelie bins in the waste area.

As the electric truck is road legal this means the operatives are able to collect waste from public litter bins around both main car parks to maximise the payload of each compactor collection.

Scott Wells, Centre Manager at Gretna Gateway said “The new waste management system has been an instant success. The site is much tidier and it has been great to generate revenue from some of our waste streams. Not only is the system much more efficient but we have increased our recycling rates and greatly reduced our indirect carbon emissions.”

Gretna Gateway now has an efficient, tidy and well managed waste compound that means waste collection vehicles only come to site when necessary. The service is zero to landfill and, because B&M are PAS 2060 accredited, Carbon Neutral.

Neil Curtis, Managing Director at B&M said “It has been a pleasure working with Gretna Gateway and they have been so receptive since day one. This truly has been a successful partnership and we will continue to look for potential improvements to further enhance their environmental performance.”