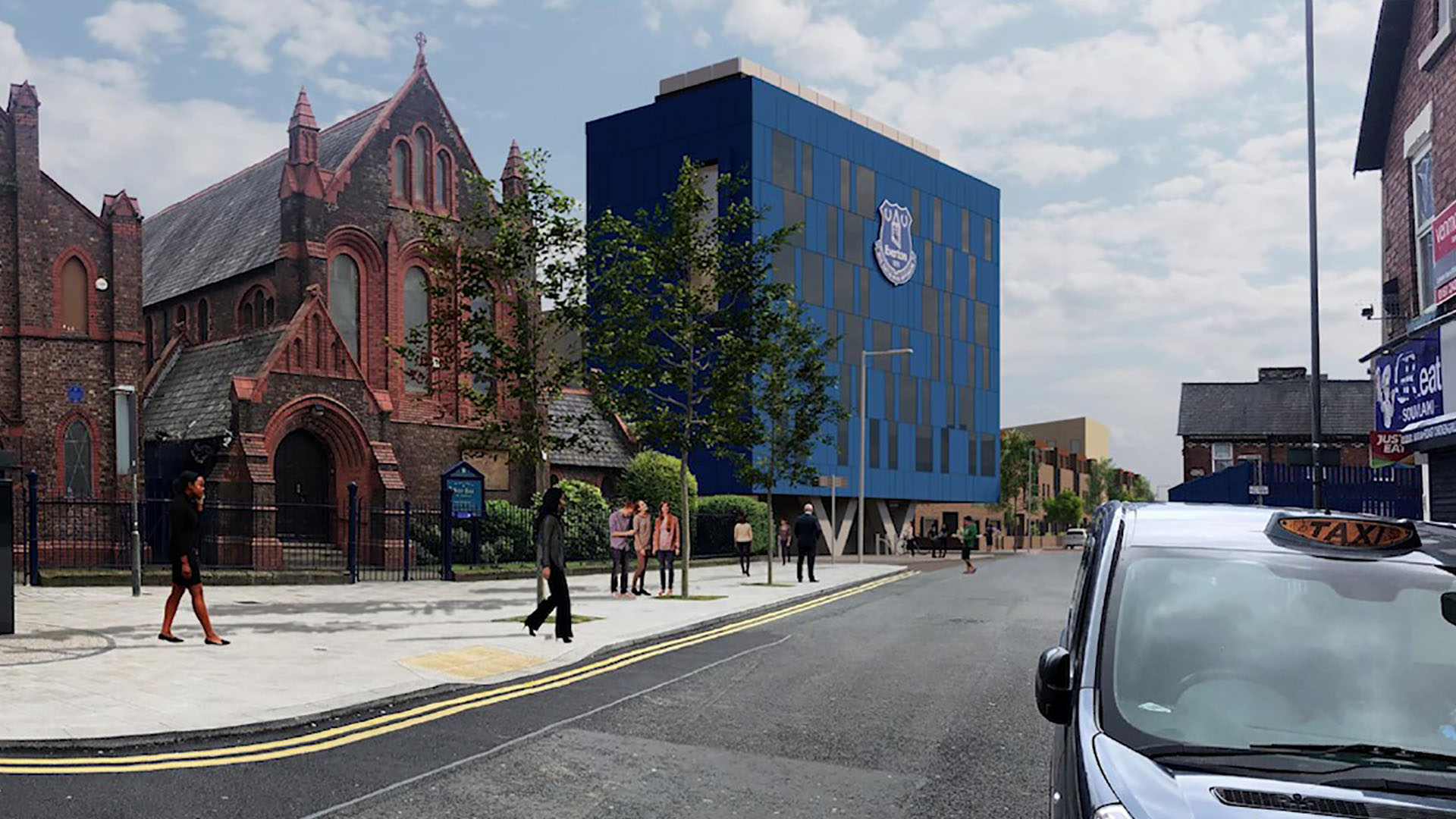 As Everton Football Club’s plans for a new stadium at Bramley-Moore Dock progress, stakeholders from across Liverpool 4 have shared their views on the Club’s vision for a re-imagined Goodison Park, calling it “life-changing”, “life-saving” and “critical” to the future of the area.

Outline plans, that will go before Liverpool City’s Council planning committee for determination on Tuesday, show that the proposals could include high quality and affordable housing, a multi-purpose health centre, community-led retail spaces, a youth enterprise zone, office and business facilities and green space which could include a lasting tribute to the Club’s achievements at Goodison Park.

A range of influential voices from across the North Liverpool community have spoken about the long-term benefits they see for the area as a result of Everton’s plans, and the things that excite them most about Club and Everton in the Community’s commitment to not just maintaining a strong relationship with L4, but helping it thrive.

Everton Chief Executive Denise Barrett-Baxendale has said that the project at Goodison Park “is as ambitious as our new stadium development” in its reach and vision and the Club has been engaging local residents, businesses and other stakeholders in understanding what facilities could be developed on Goodison Park once the playing side of the Club relocates to Bramley-Moore Dock.

The plans for the Club to leave a suitable legacy at Goodison Park will be refined in the coming years, overseen by a Trust Board and incorporating detailed consultation with the local community.

Everton in the Community will lead on this planning and community engagement with the proposal that building work will begin as soon as Everton has completed its move to a new stadium at Bramley-Moore Dock.

Everton’s proposals would complement the growing community campus in the shadows of Goodison Park and the £10m investment already made by the Club to convert derelict buildings intro thriving community assets. This includes the Everton Free School and Football College, The People’s Hub, the Blue Base and the soon-to-be built mental health drop-in centre The People’s Place.

St Luke’s Church is home to the Everton memorial garden and is a well-known stop for supporters before the match, as they visit The Everton Heritage Society and enjoy ‘Teas for Fans’. Everton stepped in with a team of volunteers when St Luke’s were unable to continue to staff ‘Teas for Fans’, and the Club also contributed to electrical repairs to ensure the space could still be used. St Luke’s also played host to a special consultation event featuring Dan Meis as the Club tested its 11 key principles for a new stadium development.

Rev Frank Cain, Vicar at St Luke the Evangelist Church, highlighted the “warm” relationship between the church and Everton, which he would like to see continue after the stadium move as his parishioners and Everton in the Community share common goals to serve the area. Rev Cain praises the “sensitivity” of the Club in developing its “ambitious” legacy plans, and for its objectives of tacking inequality and poverty.

Dave Kelly, who co-founded Fans Supporting Foodbanks is confident that the Club’s link to L4 and the fans’ involvement with Fans Supporting Foodbanks will remain strong, saying, “I think the whole project down at Bramley-Moore and within L4, I don’t see as a move or with it being two separate entities”. Dave also says that he believes the legacy plans will benefit not just L4 but the wider City region and North West.

Simon Huthwaite, Operations Manager at St Andrew’s Community Network says that while the stadium will be missed, “there is a great opportunity for a lot of positivity to come out of the stadium move” and that, “there may be new opportunities for a collection of food, and I think there is an element of education in there. We do a lot of money education, and I think there’s

definite opportunities to work together closely in that space going forward.”

high hopes for what the two can do together as part of the Goodison Legacy. He says that while some of the young people he works with expressed worry at the stadium moving, having seen the plans, “I think all the worries and fears that they have about the Club moving will go because they can see what’s going to be left.” He adds that if the Legacy project, “takes one young person off the street it could potentially change their life, could potentially save their life…maybe a young person has the opportunity to start up their own business, again it’s life-changing and life-saving.”

Stephen Power is Elder/Church Leader at Spellow Lane Evangelical Church and is also a Chaplain for Everton Free School. Everton in the Community have supported Spellow Lane Church’s groups with craft activities and meeting spaces, and the church has even hosted some services at The People’s Hub. Stephen says that while there may be an initial short-term economic impact in L4 during the redevelopment period, there is “the potential and possibilities for the area to grow, to grow economically, to grow with an educational programme, to grow with relationships…and to grow by encouraging people from outside the area to come into the area”. He adds: “It will be good for us I think, and good for Spellow Lane, and good for Walton.”

Bradleigh Jones, Head of Memberships, PR and Communications for The Community Shop based on County Road says that he is “certain” the Goodison Legacy Project will “open up new, more interesting ways” that Everton in the Community and The Community Shop “can partner up together to make a difference” and achieve a shared vision to build a stronger community. The Community Shop began working in partnership with Everton in the Community at the start of the pandemic to supply and distribute food within the Blue Mile area, and the two have continued to work on programmes including the delivery of the Healthy Holidays programme, to feed and educate children throughout the holidays and support their health and wellbeing.

Community Shop member Vicky Hopkins says the legacy will help build a stronger community and that she is excited about the green space within the Goodison Legacy vision, saying, “the green space idea is fantastic,” and that a new green area will “rekindle that connection” between nature and the community.

Clare Lamontagne, Deputy Principal at Everton Free School discusses how her pupils have been involved in the Goodison Legacy consultation, saying: “We had an open discussion with the students, and the young people came up with ideas. When we look at our outreach programmes, and we take children out, they were looking at why do we have to go out into other places to access these sort of activities, why can’t they be within our community, on our doorstep.”

Richard Cronin, Principal, Everton Free School says, “Statistically when you look at the area in terms of literacy levels, outcomes in terms of GCSE, and people progressing to higher education, if you look at life expectancy, involvement in criminal activity, all of the statistics are flashing red, and there is a real opportunity here from the educational side to engage young people, to give them hope and to direct them in different pathways – and it’s critical to the area.”

Jim is backing the controversial idea of Covid passports.In a toughly argued blog he claims that businesses that have suffered so badly are entitled to the measure. Opponents will have to pay a price for their principles.

Civil and structural engineering firm, Sutcliffe, is enjoying a bumper start to 2021, announcing a 5% increase in profit for the first half of its financial year (September 2020-March 2021) compared to the same period in the previous year, as the country marks one year since the first Covid-19 lockdown began.

Roland Dransfield PR is delighted to share that they are Official Supporting Partners of the second Ripples of Hope Business & Investment Summit.