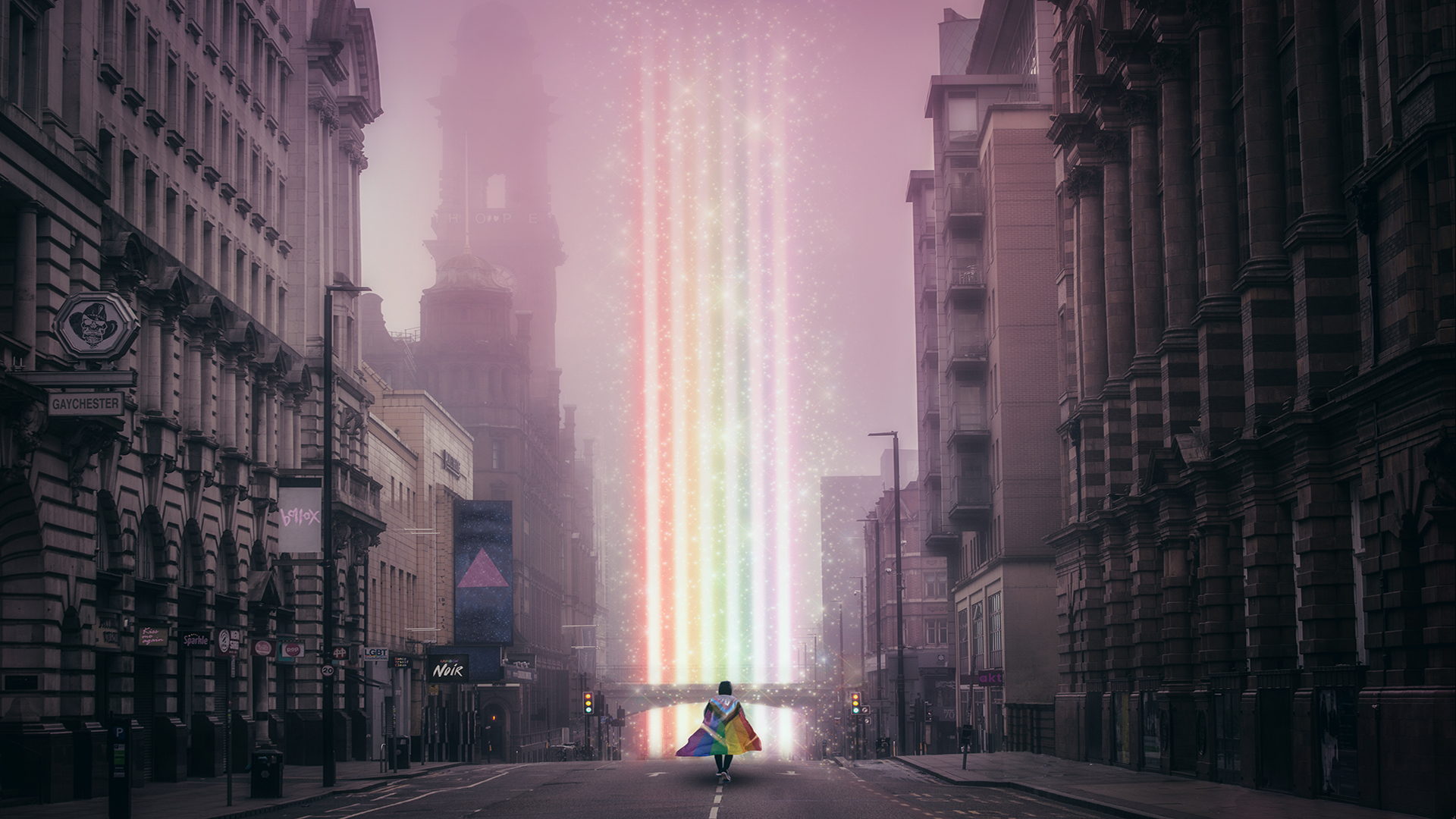 Local artist Manchester Tom has been commissioned by Embryo Digital to create a Pride-inspired piece of art for LGBTQ+ charity, akt. Available throughout August, donation-based downloads of the image are available at embryodigital.co.uk. All proceeds will go towards helping akt support Manchester’s young LGBTQ+ community into safe homes and better futures.

akt – which was established in 1989 with the aim of providing homeless LGBTQ+ people with a safe place to live – has since helped over 50,000 young people, through services including emergency accommodation, supporting young people into independent living, and their digital mentoring programme. With 24% of homeless people identifying as LGBTQ+, and 77% of the LGBTQ+ young people akt work with stating that coming out at home was the main factor in causing their homelessness, there is a constant need for care and support.

Carrie Reiners, Deputy CEO at akt said, ‘’We’re so grateful to everybody that continues to support the work we do at akt. Without our supporters, including creatives like Manchester Tom who dedicate their time and skills to support us in different ways, we wouldn’t be able to do what we do. It’s the direct support of volunteers that helps us keep LGBTQ+ young people safe and housed.

While many of the young people we support in Manchester have experienced discrimination for being LGBTQ+, the city as a whole is loving and welcoming of everybody and we love that Manchester Tom has captured that. We’re also so pleased he’s chosen to support akt with the image, and the proceeds from the image will help us to ensure that no one young person has to choose between a safe home and being who they are.’’

Commenting on his artwork, Manchester Tom said, ‘’As this piece is inspired by the akt, I wanted to create something that speaks to the hope that young people feel when they arrive into a big city, thanks to the queer community that exists there. It’s often a bewildering and lonely experience, but the first time you discover some of these institutions it can open up a whole new world and seem like you’ve arrived in Oz. They can be a real haven from the trauma that is going on elsewhere in life. I hope this captures that feeling of hope on the horizon.”

Manchester Tom is active within the community himself. Along with a photojournalist project called ‘Queers of Manchester’, in which he spotlights the ‘’fabulous queers in the city of Manchester’’, he also hosts a bi-monthly LGBTQ+ club night that takes place at YES on Charles Street, called ‘Dance Yrself Clean’.

With the cancellation of Pride being felt throughout the whole community, Manchester Tom also commented on its significance, stating that Pride has always been, ‘’…a celebration of and a struggle for freedom.’’

Carrie echoed these words, ‘’Pride is a real lifeline for so many LGBTQ+ young people, as it’s often the only time they can truly feel themselves and be surrounded by like-minded people. Losing that during lockdown has been tough on lots of the people we support, in particular those who are living at home with parents or family members who don’t accept them. Fortunately, some incredible community-building work has been done online, which we hope will go some of the way in making LGBTQ+ young people feel less alone.’’

Wanting to extend support to as many people as possible, Carrie added, ‘’Don’t hesitate. You can self-refer on our website, call us or use our live chat function if you prefer not to talk or are unable to. Our team will book a consultation and work with you on the best way to support you, and practical next steps. If you’re anxious, alone or in danger that isn’t specifically housing-focused, there are some other fantastic charities and groups you can also text or reach out to, like Shout or LGBT Switchboard.’’

To purchase your digital copy of the artwork for a minimum donation of £2, please visit https://www.embryodigital.co.uk/akt-charity-donate/.  Within your digital download, you’ll receive a high-resolution desktop version and a phone screen version.

For your chance to win your own A0 print of the piece, please visit https://go.rallyup.com/9d62f2. To win, simply enter the raffle, and a winner will be announced on the 31st August.