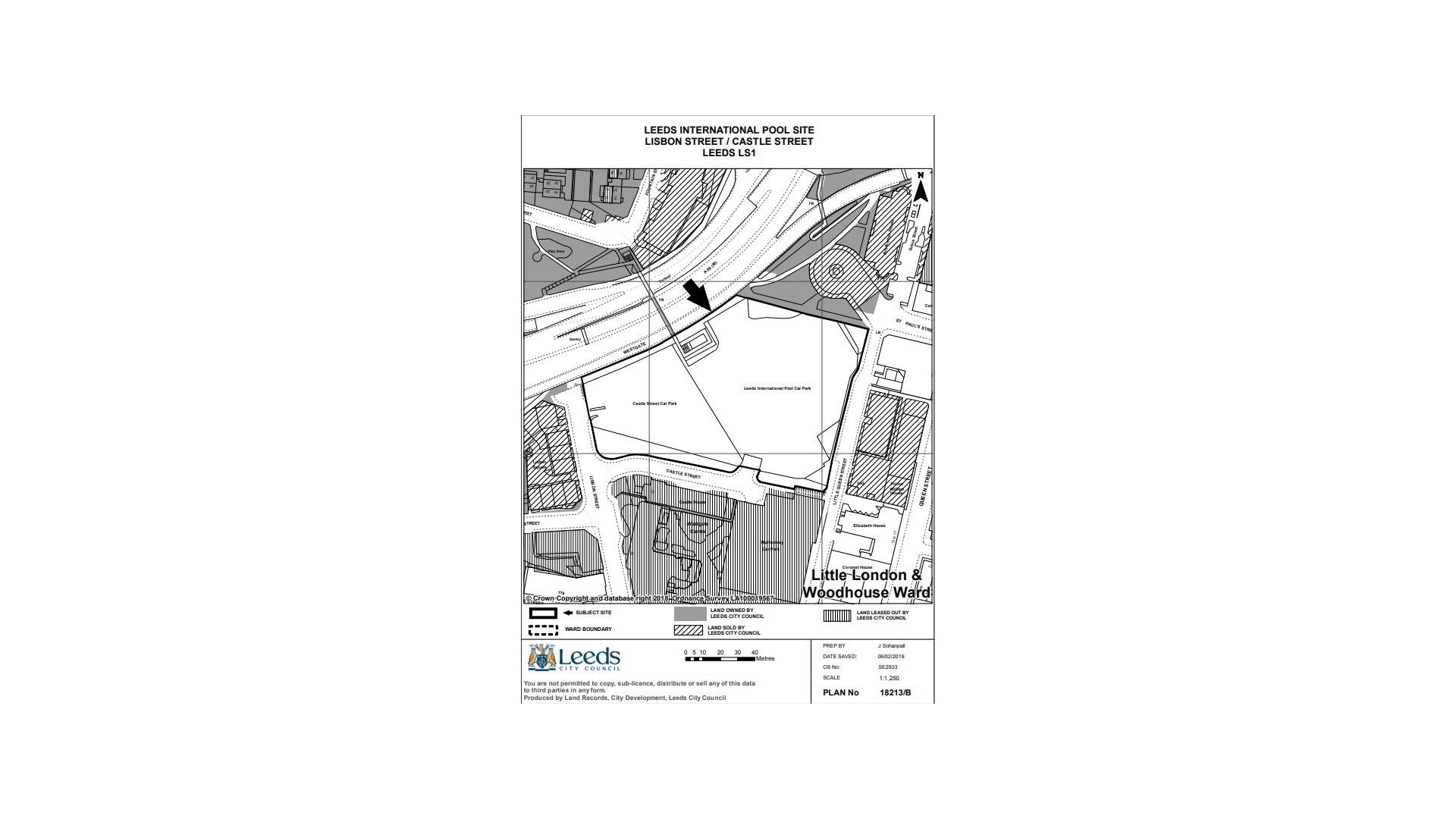 Leeds City Council has announced that it proposes to invite formal bids for a multi-million-pound development opportunity – one of the most prestigious in the city centre.

Speaking on the Leeds City Region stand at the global property conference MIPIM, Martin Farrington, Director of City Development at Leeds City Council, announced the planned sale to developers and investors interested in developing a prime high-rise city-centre and Grade A office scheme.

Formerly the International Pool, the 1.12-hectare site is located on Lisbon Street, in the heart of the city’s business district, close to Parklane Group’s proposed INC development and the Innovation District. The site has the potential for around half a million sq ft of mixed-use commercial and retail space and could include residential units or a hotel, to service the city’s growing business and visitor economy.

The scheme will capitalise on the momentum of the city’s development of Grade A commercial space including at Wellington Place, which will provide for a further 155,000 sq ft of high-quality office and retail space with rooftop terraces when the next phase completes in 2020. This latest opportunity marks the halfway point in a £10bn investment programme across Leeds – one of the UK’s largest city investment programme – which will support the city’s ambition to double the size and economy of the city centre.

Leader of Leeds City Council Councillor Judith Blake said: “Working with our partners, stakeholders and businesses, Leeds has worked very hard in recent years to provide the ideal conditions to encourage investment in the city, new developments, jobs and learning opportunities as well as skills development to increase productivity and promote inclusive growth. We are very proud of the impact of that work, which has seen Leeds create new private sector jobs at a rate faster than any other city in the UK, and we want to continue building on that success through the development of prime sites like Lisbon Street to further boost our economy for the city and all our residents and businesses to benefit from.”

Martin Farrington, Leeds City Council Director of City Development said: “Leeds is a city that delivers, as shown by our ever-growing investment programme, which is one of the largest in the UK. We are determined to continue to bring the absolute best investors, operators and businesses here so that investment in Leeds not only boosts the economy but also helps create new and better jobs and offers opportunities for all in the city through inclusive growth.

“We are seeing a tremendous number of new schemes, developments and regeneration projects now progressing which is hugely attractive to major organisations looking to invest in our city. This Lisbon Street site occupies a prime position among many of the city’s top financial, legal and professional services employers within our core business district, which makes it a very desirable space and development opportunity. To meet the growing demand for Grade A office space in the city centre, we are pleased to announce our proposal to invite formal competitive bids for the site here at the world’s largest property conference.”

The £10bn pipeline of investment includes the major redevelopment of Leeds Station and one of Europe’s largest regeneration schemes, the 253 acre South Bank district. With public spaces, a city park, 8000 homes, offices, education, leisure and retail provision South Bank will double the size and critically the economy of the city centre.

The £10bn programme has already included the delivery of premier shopping destinations such as Trinity Leeds and the award winning Victoria Gate, as well as phase one of the Leeds Flood Alleviation Scheme completed in 2017, with ambitions for a £112m second phase to follow. £270m is being invested in public transport, plus huge investment in public realm through the Our Space programme.

In a game-changing moment for the city, last year national broadcaster Channel 4 announced the relocation of their national headquarters to Leeds, a move which could create 1,200 jobs and have an economic impact of more than £1bn over the next decade across the region.

Luxury retailer Burberry has recently added to their base which now employs over 400 staff at its new Burberry Business Services site at Queen Street in the city centre to add to the list of major companies and organisations locating to the city including Sky, Perform Group, Reed Smith, HMRC and the most recent addition of The Link Group.

Adding to the investment pipeline is Rushbond’s development at First White Cloth Hall, a Grade II listed former cloth market on Kirkgate, Leeds, which is one of the oldest buildings in the city. Work has started on site just last week (8 March) as the first step at transforming the iconic building into commercial use.

Jeff Pearey, Chair of Leeds Chamber of Commerce Property Forum said: “There has never been a better time to invest in and develop in Leeds and the proposition at Lisbon Street is a prime site representing a fantastic development opportunity.

“The investment being driven by the city council and the wider public and private sectors means there is continued demand for Grade A offices in the city, together with ancillary supporting retail and leisure offerings. Leeds continues to be at the forefront of locations in creating a city that people want to live, work, visit and invest.

“There is great confidence in the Leeds economy and this momentum is only set to build as more people recognise the unparalleled quality of life and economic opportunities the city has to offer.”

As one the UK’s fastest growing cities, Leeds has a young, digitally-skilled talent pool with a dynamic start up culture and thrives on its ambition to always be a leading centre for economic growth and success with an unrivalled lifestyle offer.

To capitalise on what is sure to be one of the most exciting periods of growth in the city’s recent history, Leeds has set out a five year Inclusive Growth Strategy and will continue to host the Leeds Digital Festival, one of the largest tech festivals in the North with over 20,000 people attending.