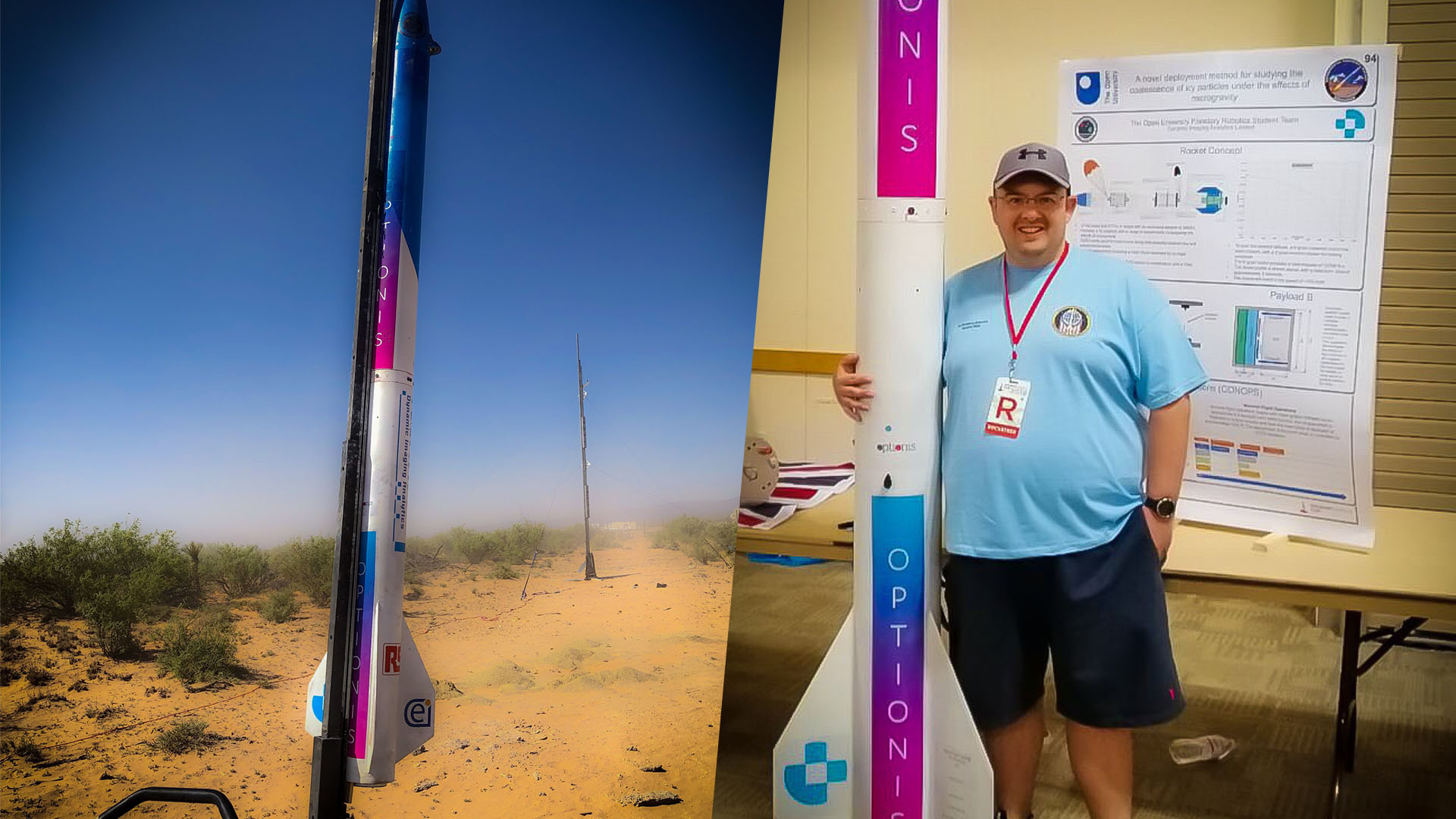 A worker from Huyton has helped blast his company’s brand towards the stratosphere after travelling to America to take part in an international rocket-building competition.

David Harris, a Senior Client Services Advisor at Warrington-based Optionis, flew to Spaceport in New Mexico – home to world-renowned space brands such as Virgin Galactic – after working with a team of engineering students to build a 14-foot rocket.

The 35-year-old is currently studying for a Masters in Engineering at the Open University alongside his full-time role at the professional services firm, which has helped fund the project and saw its logo added to the final build.

From the launch pad, the rocket took off and hit top speeds of around 750 mph and reached a height of 20,800 feet in the air before falling safely back down to earth.

He said: “It’s been an unbelievable experience taking part in this competition and from start to finish, I’ve enjoyed every second of the project.

“We hit a bit of a snag in the development phase because nowhere in the UK would actually allow us to launch a rocket of this size, meaning the first time it was launched was in New Mexico!

“We were all delighted with the height we achieved and very proud to have finished so well in the competition. Our team was representing the UK too as one of only three British teams.

“Optionis have been really supportive of the project, giving funding and allowing me time off to push on with the design which has been a massive help. The Open University have been fantastic too, providing us with a workshop, help with raising finance and administrative support.

“The whole thing has been a wonderful learning experience and I’ve made memories that will stay with me for years to come.”

David and his team crowdfunded a lot of the money needed to finance the build of the rocket and secured sponsorship from three commercial partners, including Optionis.

As well as attracting students and spectators, the annual Spaceport America Cup is also attended by Space Agency representatives, as well as those working in the commercial space industry.

The rocket build is not the first time David has been involved in engineering work for space exploration either, having also helped to build a prototype Mars Rover earlier this year.

The Rover was designed to replicate tasks required for Mars missions, with functions such as autonomous navigation, climbing tricky terrain and drilling to obtain and analyse soil samples.

David and his team will be attending a competition later this year in Poland to show off the Rover as he continues to pursue his dream of becoming a Research Engineer.

“David is a very motivated and highly skilled member of our team and we’re really proud of what he’s managed to achieve with the rocket build,” said Ifti Ahmed, Chief Operating Officer at Optionis.

“Seeing the Optionis brand travelling towards the stratosphere at 750 mph was unbelievable and the pictures from the launch were incredible.

“David’s been with us for a number of years and has been studying for his Masters alongside his full-time work, which shows how committed he is and how hard he works.

“He’s halfway through his studies and still has four years to go on his Masters but he’s certainly got a bright future ahead of him.”

Founder of Talk Twenties, Gaby Mendes has written a blog for International Women’s Day discussing her progression from University to founding the successful business she runs today and being named in Liverpool Echo’s ’30 Under 30.’

Merseyrail will be increasing its services across most lines from Sunday 14 March.

Davies Partnership has marked its 25th year with a fresh new rebrand, website, new structure, new hires, and key promotions as the business strengthens its position in the market during the COVID19 Pandemic.