The Government are managing the crisis badly. Fact.

In his latest blog Frank McKenna explains why giving any government a ‘pass’, even during a crisis, would be an afront to democracy – and outlines why he thinks Boris Johnson and his colleagues are struggling to manage the Coronavirus crisis effectively. 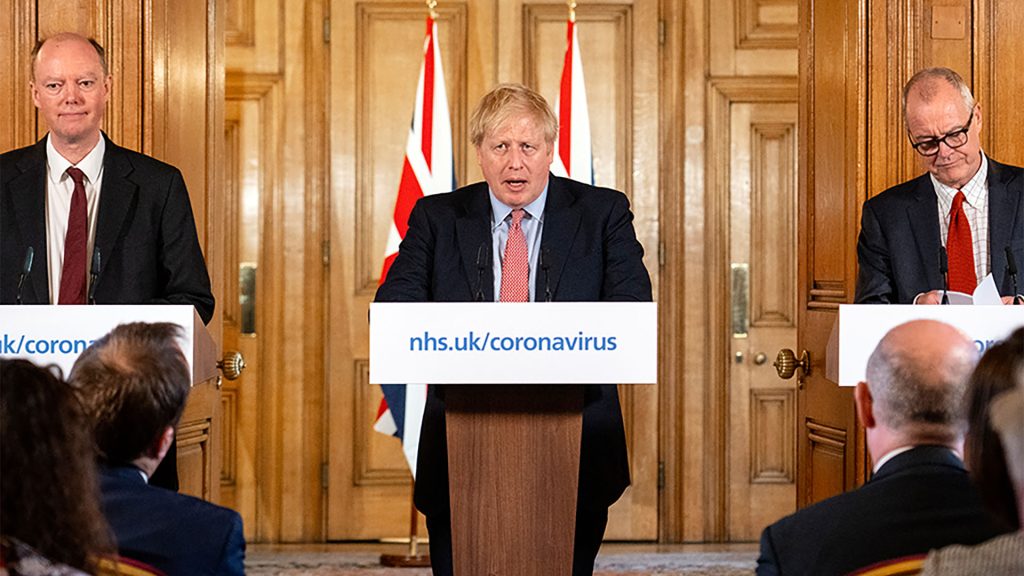 [vc_row type=”in_container” full_screen_row_position=”middle” scene_position=”center” text_color=”dark” text_align=”left” overlay_strength=”0.3″ shape_divider_position=”bottom”][vc_column column_padding=”no-extra-padding” column_padding_position=”all” background_color_opacity=”1″ background_hover_color_opacity=”1″ column_shadow=”none” column_border_radius=”none” width=”2/3″ tablet_text_alignment=”default” phone_text_alignment=”default” column_border_width=”none” column_border_style=”solid”][vc_column_text]There is a nonsensical school of thought doing the rounds that due to the Coronavirus Crisis, criticism and scrutiny of the government should be paused.

The fact is that, in a democracy, it is not only desirable for our leaders to held to account, it is the absolute duty of opposition politicians, journalists and commentators to fiercely scrutinize the actions of the executive – particularly in times of crisis.

This does not mean mudslinging and headline grabbing for the sake of it. It does mean studying the facts and calling out Boris Johnson and his colleagues, and indeed those who went before them, for mistakes and errors of judgement.

The idea that this can wait until the pandemic is over is nonsense for two reasons. First, the mistakes that have been made, given that we are in the beginning of this thing according to all independent observation, means that lessons can be learned now – and ensure said mistakes are not repeated.

Second, in a world of twenty-four seven news and with many of the population seemingly having the attention span of a Gnat, it would be tempting for a government elected on populist messages to attempt to ‘move on’ from the crisis as quickly as possible, with ‘the national interest’ being cited once again for such an approach, thus removing any opportunity to highlight serious failings that have undoubtedly taken place Pre-Pandemic, post-Pandemic.

So, where have our political masters got it wrong?

First, Austerity. This abomination of an economic experiment is the single most important reason why those NHS and care workers who we applaud every Thursday evening for their magnificent and courageous efforts, are without the necessary equipment to protect themselves, never mind care for others.

Running around having to order PPE and build emergency hospitals across the country was avoidable had a different economic approach been taken than that adopted by then Chancellor George Osborne in 2010 and subsequently continued by his successor. Fact.

“But the government didn’t know a Pandemic was coming” I hear you cry. The Coronavirus was not an unseen threat by any stretch of the imagination. For the past THIRTEEN years an outbreak of such a killer disease has been deemed the greatest national threat by the National Risk Register. Fact.

An obsession with Brexit is another reasonable charge to place at the feet of the government. Theresa May found her entire premiership dominated by the subject. Literally Billions of pounds have been frittered away in preparing for a ‘no deal’ scenario. Calls to create an ‘alternative cabinet’ that could get on with the day-to-day management of the country during the Brexit negotiations were rejected. The Brexit obsession Is seemingly continuing within the corridors of Westminster, with initial refusal to participate in the collective purchasing of much-needed ventilators with EU partners bordering on scandalous. Fact.

To compound a difficult situation, our relatively inexperienced Prime Minister made the ultimate mistake just prior to the crisis by appointing a cabinet full of yes men and women. Who can forget that cringe worthy press call, where Boris had his minions reciting the populist pledges that had given him a thumping commons majority, parrot fashion? Ignoring the old adage, that all successful leaders follow, of surrounding yourself with people who are better than you, the PM has left the country in the hands of a group who are ‘learning on the job’, rather than a cabinet of all-talents and experience. This was clearly demonstrated when Boris Johnson had his serious health scare and we were subject to witnessing Dominic Raab and co doing a fine impression of ‘rabbits in headlights’ at a series of government press conferences. By choice, the PM and his key advisor wanted a compliant cabinet rather than a competent one. Fact.

“But they are following the Science” is the other great defence offered in terms of the government’s approach thus far. Nonsense. Anyone who has been in a senior political role knows two things about advisors and advice, scientific or otherwise. One, the advisor likes their job, and therefore their opinions will inevitably be influenced by what they think their political masters want to hear. Two, you can take advice or not. Ultimately, the buck stops with you, the politician. The government are trying to hide behind the ‘following the science’ phrase, which is disingenuous. Fact.

I could go on. The failure to cancel the Cheltenham race Festival. Allowing Madrid supporters into the city of Liverpool for a Champions League game. The Machoism displayed towards the virus pre-lockdown from the PM, who subsequently ended up in intensive care with COVID-19. The very public setting of targets that have subsequently been missed. Disinformation and inaccuracies in intelligence that has been offered. A woefully poor communications strategy. All these things create a culture of suspicion, rather than confidence. Fact.

When I articulate these views to those who are more sympathetic to the conservative cause, I am told that it could have been worse, Corbyn could have been in charge. But the reality is, it is hard to imagine that he and his team could have done any worse. Fact.

Boris Johnson and his colleagues can pretend that it is the usual suspects who are whining about their performance. But any government that elevates Piers Morgan to national hero status must be getting something badly wrong. Fact.

SUNAK IS HAVING A GOOD CRISIS

The stand- out performer during this challenging period has been Rishi Sunak. The chancellor may not have been able to satisfy every single sector and every single individual within the business community, but he has tried his darndest to do so.

The range of measures that he has announced will not protect the UK economy from a massive hit. But it does give business a fighting chance of bouncing back when we get to the other side of this thing.